There's a rumor that the reason why the RHS is reluctant to upgrade d'alessandroi to species status is that the original primary hybrids made by the Eric Young Foundation were made with d'alessandroi, not besseae. If true, this would make all those primary names invalid and create a mountain of paper work for the RHS because all those primaries using d'alessandroi would have to be re-named.

The original phrag d'alessandroi habitat is far removed from Chiguinda, Ecuador and the species does, in fact, still exist in its natural habitat. I have observed the pollinator of this species and it is definitely not a hummingbird. Culture information as reported in this thread is not consistent with my observations or experience growing true D'alessandroi. True D'Alessandroi likes to get a bit dry between waterings and has a tendency to rot if kept as wet as Besseae likes. Moving plants of D'alessandroi into a more open mix that allows for some drying between waterings has led to spectacular results under 2 different sets of culture. Perhaps this explains its rarity in cultivation. Its natural habitat is not as wet as Besseae. Besseae likes constant seepage on exposed granite cliffs, while D'Alessandroi prefers more boisserianum type of conditions, growing among grasses and other plants in a habitat that tends to be a bit dryer.

In my experience, based upon what is going on fifteen years of observation of both species in cultivation and in situ, using the growth habit as a taxonomic guide is foolish. While true that D'alessandroi will branch more freely, both species can branch extensively, besseae more so when allowed to form multi-growth plants and left undivided for several years or more. Additionally unsupported is the contention that one species tends to produce new growth in clumps as opposed to longer stolons. Once presented with a sufficient sample size this misconception becomes apparent. This trait depends more on the individual than the species.

The true distinction between the species can easily be observed in mature plants of D'alessandroi. Vegetatively the plants are ENORMOUS as compared to Besseae, with leaves 2 to 3 times as long and wide. It is not uncommon for mature plants of D'alessandroi to have leaves 18 inch's long and 3 inches wide. The cultural discrepancies can be eliminated as a control as my observations have been made with wild plants of both species growing side by side after several years in cultivation. Also, D'alessandroi flowers have unique down-swept petals.

While cross pollination is impossible to rule out, the true habitat of D'alessandroi has been stable for years and remains a closely guarded secret. Besseae, on the other hand, tends to have more inherent variability and has been known to "pop up" in previously well explored area's in central and southern Ecuador. The trade winds are unpredictable as the wind swirls around the mountains, through the valleys and given Besseae's fondness for exposed cliff surfaces new populations of besseae have been observed to establish on recently cleared cliff surface with recent blast marks. The same cannot be said of D'alessandroi.

I would caution any serious phragmipedium enthusiast against reliance on opinion and conjecture concerning D'alessandroi and Besseae. Cultural and taxonomic opinion in the absence of sufficient knowledge, exposure and information has led us to the point we are at now, where confusion and supposition rule the day and phragmipedium enthusiasts are left staring at a species plant or registered hybrid and left asking themselves exactly what is it that I am growing...

I don't suffer from insanity; I enjoy every minute of it.
Į viršų 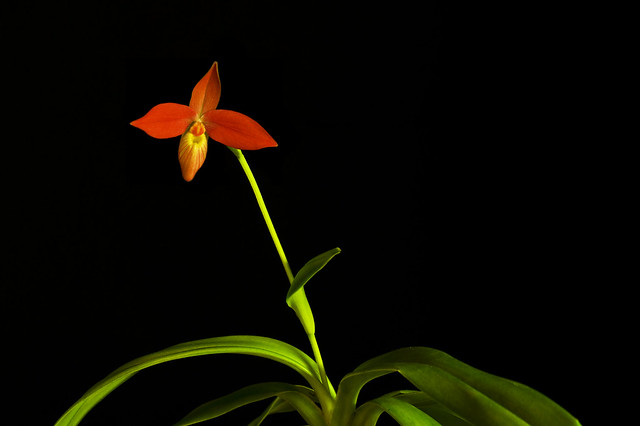